Charli D’Amelio is an American TikTok star who became a social media sensation in 2019, she makes 100,000 US dollars per post on her TikTok and she is just 17 (soon to be 18), which sounds astonishing right? Recently she with her family moved to her new house from her childhood home which is located in Norwalk, Connecticut, and her fans are confused why is that?

If you are one of them then in this blog you are going to get all the information about the life of Charli D’Amelio including “Charli Damelio Hollywood Hills Mansion”.

Why did Damelio’s Family move to the Hollywood Hills Mansion? 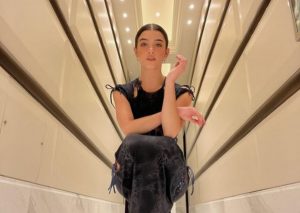 Charli Damelio with her family including her sister Dixie and parents Marc and Heidi moved to her new home located in Hollywood Hills. According to New York Times, the real reason for their relocation is business opportunities which are great in number in Los Angeles.

The D’Amelio Show is one of them, premiered on September 3, 2021, and her sister Dixie is also pursuing her music career. These two sisters already have their own clothing line. Well, we have no idea for how long these sisters are planning to stay here but the paper says, Dixie is interested in going back in the future while Damelio’s plans are not clear.

What’s the Worth of Charli Damelio House?

Charli Damelio’s family sold their home back in Norwalk, Connecticut for 914,000 US dollars where she started making Tiktok videos and moved to LA in the mansion which is stunning and has a worth of 5.5 million US dollars.

The blocky structured design of this mansion is just outstanding, crafted from glass, concrete, and steel in order to make it eye-catching. The family of Charli Damelio is very happy and satisfied with the purchase of this mansion but they are still trying to digest the sudden fame of Charli.

Her fans are wondering what house is Charli Damelio in or what her new mansion looks like, no doubt that the mansion is gorgeously designed and it has 4 bedrooms and 6 bathrooms. Charli Damelio House is on 5,500 square feet of space.

This dream house has a chef’s kitchen, storage for wines, a beautiful waterfall island, and a pantry to walk in. The master bedroom of this mansion is perfectly designed and it has everything you’d expect to be in it including a dressing room, a fireplace, a rain shower, etc.

The pool, spa, a fire pit lounge, and a BBQ kitchen which is built-in are among the other things that make this house a completely amazing place to live in. Furthermore, this mansion is located in Nicholas Canyon which is a residential area between Mulholland Drive and Hollywood Boulevard.

How did Charli Damelio become so famous?

Charli was born in 2004 on the 1st of May, she was a hard worker since childhood and started dancing at the age of 3. Her life took a turn when she started posting videos of her dance moves in 2019 on Tiktok which is a famous video-sharing app.

Her followers increased quickly as she was so active and in no time she was the second-highest earner of Tiktok in 2019, according to the news. Her name was added to the book of Guinness World Records in 2021 for being the most followed TikToker.

What do Charli’s parents think of her success?

Being parents, Marc and Heidi are very protective of their daughters and they were very concerned when Charli got sudden fame. Marc stated in an interview that sudden fame at such a young age is dangerous.

He further stated that he is familiar with the dangers of getting fame at a young age and all the pressure of being in a spotlight is too much to handle and things could become worse.

Well, that doesn’t mean he is not happy with his daughter’s success, his daughters listen to him and it is a big relief for him and he would continue to guide them in the future and keeps his eyes open.

What You Should Know About Charli Damelio:

Charli D’Amelio is living a life everyone wishes for but everything comes with a price to pay. Her life and struggles aren’t as easy and simple as they seem on social media.

But not to forget, her life was very normal like everyone’s, her mother is a model and influencer and her father is a fashion designer. Her elder sister Dixie is also a Tiktok star.

Gaining popularity at such a young age is hard to handle but Damelio’s sisters are doing it beautifully. Charli along with her family moved to a new house after becoming famous on TikTok.

There were many questions in the minds of her fan following including what house is Charli Damelio in or where is her new mansion, so we got all of it covered in this blog along with Damelio’s lifestyle.